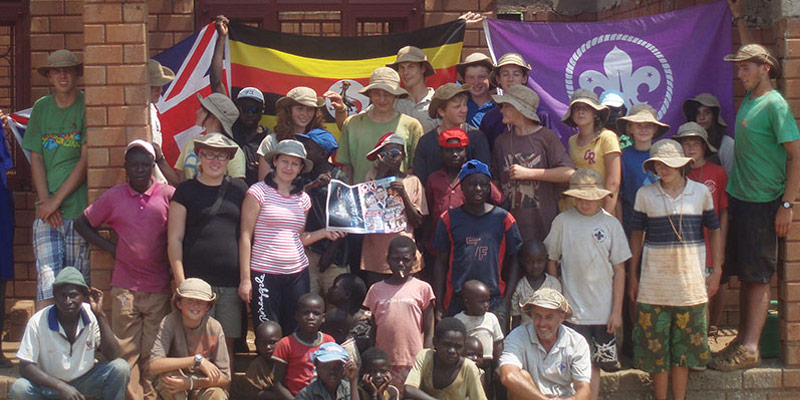 ICM were lucky enough to join a group of 28 scouts and scout leaders for part of their five-week expedition in Uganda. Megan and Zivile share their experiences with us.

It was the first day of our trip to Uganda and the first time either of us had been to this country. After a long flight, we touched down at Entebbe Airport where scout leader, Mike Harley, greeted us. The site of the vocational training centre is located three hours away in Lubanyi and after a journey along many bumpy dirt roads, we finally arrived at our destination. At the campsite we pitched our tents and were introduced to the scouts. We then went straight to work helping with the building of the training centre, and Zivile made her first brick using the ICM-donated Hydraform brick machine.

After our first night camping in Lubanyi, we received an early awakening from the scouts, all eager to start work on the building. Today was a day of hard manual labour: Zivile helped lay the concrete floor and Megan assisted in the construction of the roof. Laying the floor was an arduous task and took a chain of several people passing along bowls of concrete over a short distance. Constructing the roof was an especially tricky task as there were very few safety measures in place. Walking along the top of the brick walls with nothing to hold on to except for the wobbly roof frame was quite unnerving.

Lunchtime was much welcomed after a morning of hard work. Peter was hired as a chef to cater for the scouts through the duration of their five-week trip and he cooked some lovely meals on a charcoal BBQ.

Our third day in Uganda was away from the site as we were excused from the building work. Instead we took a trip an hour and a half away to meet up with ten explorers. These youngsters had been on a gruelling ten-day, 100 mile hike around Uganda, visiting local communities and partaking in various small projects. One of the projects involved buying a souvenir, which proved particularly challenging seeing as they were in the middle of nowhere. At the end of the ten days, they were all very much looking forward to a shower.

On our fourth day in Uganda, Peter the chef kindly offered us a tour of the village surrounding the building site and this proved to be the most educational part of the trip for us. During the tour, we were invited into the mud huts that villagers live in and that made us very aware of the luxuries we are used to in the UK.

Our time at the Lubanyi building site had come to an end so we packed up our tents and made our way to Buwenda. This is the location of the scout camp just outside of Jinja and has a scenic view overlooking the Nile. Upon arrival in Buwenda, we were able to enjoy the swimming pool of a nearby resort and taste the nicest Pina Colada either of us had ever had. After an eventful ride back on a Bod-Boda (a small motorbike taxi), we had a lovely meal at the ‘Two Friends’ restaurant, where we all enjoyed a nice pizza.

Today we went on a shopping excursion to Jinja, which has some great little shops selling interesting Ugandan souvenirs and keepsakes. Later that day we had lunch in a lovely restaurant called Flavours, situated in the heart of Jinja. Today was a much more relaxing day than the rest, as the scouts were occupied with getting ready for church the next day. We spent some time enjoying the Ugandan scenery and getting in a bit of sunbathing. That day we also celebrated two of the scouts’ birthdays. Peter made a delicious cake for all of us to enjoy.

On our last morning in Buwenda, we boarded a bus hired by the scouts to take us to the local church. The church was located in beautiful surroundings, on top of a hill overlooking the campsite. The church service was quite different compared with services in the UK. There were church singers and the hymns sung were much livelier. We also had the pleasure of being introduced to the community, who welcomed us warmly and were grateful to ICM for its help with the Nile 2010 project and the building of the training centre.

We also had the opportunity to meet Father Picavet, a local priest who immigrated to Uganda from The Netherlands 30 years ago, and set up a little village in the area. After that, we travelled to Bujagali Falls, which is one of the most scenic spots in Uganda, where we were lucky enough to stop for a short while and eat our lunch beside the falls.

At the end of the day, we said a sad goodbye to all the scouts that had made this trip so special for us and headed to the Backpackers hostel in Kampala, where we were able to share our wonderful experiences with fellow tourists staying there.

Neither of us knew what to expect when we were told we were going to Uganda to help the scouts build a vocational training centre. Nothing could have prepared us for the people and children we met along the way or the once-in-a-lifetime experiences we will remember forever. We both learnt a lot from this trip and will cherish the memories of the people and places that touched us deeply.

November 28, 2019
+
ICM support WAFA providing a venue to teach Learners within the setting of a long-term landscape study